Who has never dreamed of visiting this piece of rock lost in the middle of the Pacific Ocean, halfway between French Polynesia and the Chilean coast? Go and discover all the Easter island mysteries, a mythical island emblematic of the Oceanian continent!

Close
Easter Island, also known as Rapa Nui, is a volcanic island located in the Pacific Ocean, more or less halfway between South America (the Chilean coast, to be exact) and French Polynesia. Geographically, this island at the end of the world is part of Polynesia, in the broadest sense of the term. This is one of these Pacific islands remaining mysterious, magical just hearing its name, like the Galapagos or Hawaii.

Polynesia is a region of Oceania, in the southern hemisphere, which extends from Tahiti to Hawaii through New Zealand. This Polynesian triangle is famous for its countless islands and islets, all more or less famous. Who has never heard of the Cook Islands, Tonga, Fiji?

I had the opportunity to discover this mysterious Easter island during a one-week trip from Tahiti. This insular territory in the South Pacific is particularly known for its statues, the Moai, which are famous all over the world. There are many archaeological sites on the island to observe these gigantic carvings, here are the main ones: rano raraku, Ahu Akivi, and many others. However, the origin of the first settlement still remains uncertain. Several theories exist, like the one saying that people came by pirogue via the other Pacific islands. Origins coming from the Inca civilization have also been put forward, while some talk about an origin from the Marquesas Islands.

I personally felt something mythical, mysterious when on this island. What an atmosphere the Easter Island exudes! Unfortunately, I did not have time to spend more than a week there, but I strongly advise those who can to stay longer in order to fully appreciate the beauty and culture of the island.

The island is accessible from several international airports, the most common ones being Santiago de Chile and Polynesia. Those who are on a world tour between Chile, the Galapagos Islands or Bora Bora, take some time to make a detour to this mysterious island, I promise you won’t regret it!

I wish you a good discovery and a good trip! 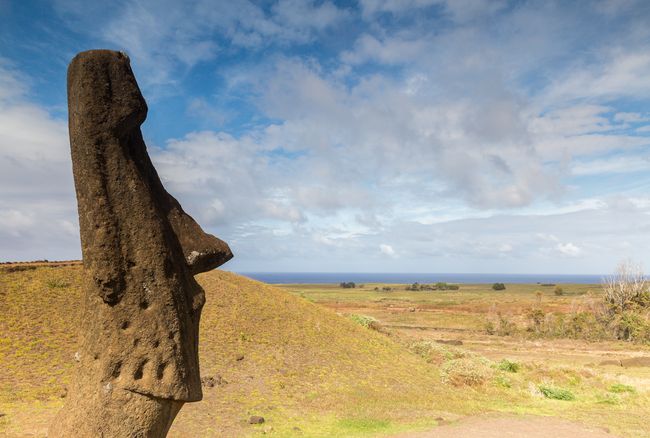 Top 10 things to do on Easter Island